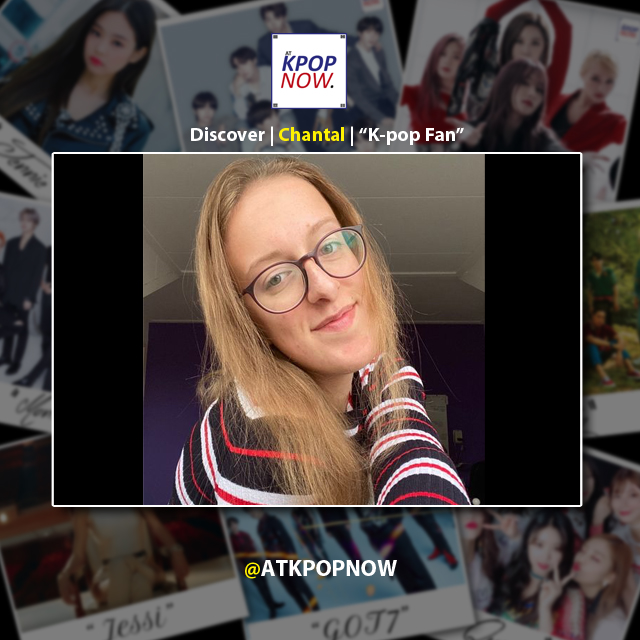 Hiiii!! My name is Chantal. I’m 19 years old and I live in The Netherlands. My hobbies are dancing, horse riding, photography, traveling, listening to music and going places with my friends.

A friend of mine introduced me to BTS in September 2019. I was sceptic at first, because I listened to other boybands, but I decided to give it a try. I started learning about the members and listening to their music. In October I officially stanned them as first K-Pop group.

I love K-Pop, because it has plenty of diversity. There are a lot of different dancing styles in K-Pop and so does their fashion. Most of the groups are telling beautiful messages through music and they work that out in their own language. The fact that K-Pop can spread this throughout the whole world, is really special to me.

I just started an Instagram account for dancing covers (I haven’t posted a cover yet). I actually started dancing too, because of K-Pop. When I found out this is a huge passion of mine, I signed up for lessons and now I’m also doing dance education at school!

Definitely BTS. Not only, because it’s the first group I stan, but their music content is different than others. The messages of being secure of yourself and loving yourself, are truly inspiring for the audience that appeal to them.

I actually don’t have a bias. Most people are pretty shocked when they hear that, but I just can’t choose! Every member has something special in their personality or appearance and I also don’t really feel like I have to pick a favorite one. Although, there are always some members who grab my attention more than others. In BTS: it’s the maknae line. Jimin, V and Jungkook are hitting a little different for me. In Stray Kids: it’s Bang Chan, Hyunjin, Han and Lee Know. In Blackpink: it’s Rosé and Lisa. In Mamamoo: it’s Solar and Hwasa. In Itzy, it’s Lia (wow that’s one!). I should’ve warned you to not ask me this question lol.

To become a K-Pop background dancer or someone related to a K-Pop idol. I’ve always wanted to be a good singer, but I don’t think songwriting and stuff is something for me. I’m on my way to become a professional dancer now, so I would love to make that a dream come true. I also don’t want to be in a label where it’s forbidden to have a relationship or to be dating someone. I think people should be free to live their personal life and especially their love life, but as long as it doesn’t affect their progress.

A big shoutout to my friend Danique! Without her, I would’ve had no idea when I found out about K-Pop. Also, because I started listening to it we signed up for K-Pop lessons in our city where we are learning K-Pop dances and having a lot of fun! I really found my passion in those songs and now we are developing in more styles and signed up for other dancing classes!

If I could change the world, it would be to respect and value each other. There are too much people in the world that just can’t accept an opinion and that’s where the drama starts. It’s going on in the world at every moment, but also in K-Pop and I think we should let it be as it is. If you don’t like something or someone, it should be fine and you go on with your life instead of hating or causing trouble.