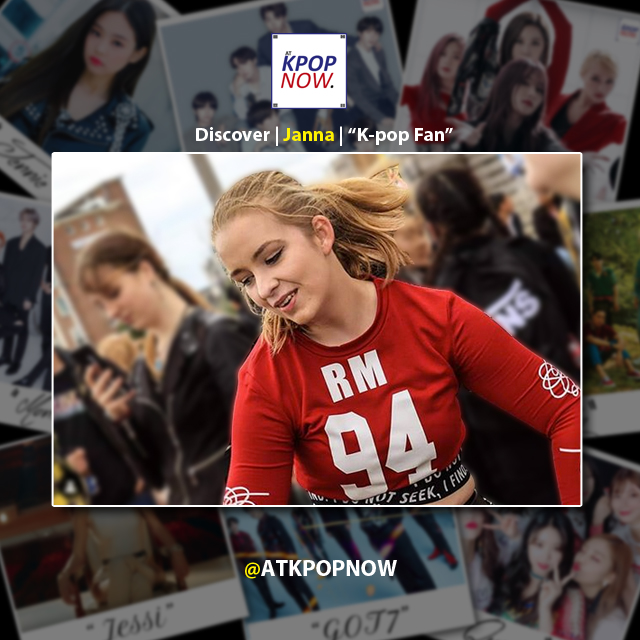 Hii, I’m Janna. I’m 21 years old and from the Netherlands! I absolutely love dancing and started an own K-pop dance cover group in 2018.

I’ve been a fan since 2015. I found out about it through YouTube back in 2013, when I saw a teaser for BTS’ debut song “No More Dream”. I really liked their debut album, but after that I kinda drifted out of the K-pop scene. Until I found Got7’s song “Just Right”, which got me right back in and I have not regretted it since.

K-pop is very different. All western songs are either about love or partying, where as K-pop songs will be about self love or mental health. What stands out the most is probably the upbeat tunes and the bright music videos. As well as the concerts. K-pop concerts are so different from western concerts, which I really love. The whole setting and fanchants make it a magical experience. The fandom is very socially active and making friends with other K-pop fans is so easy. For example, I met my best friend through a BTS concert.

Back in 2018 I’ve started a K-pop dance cover group called Azalea Dance Crew (IG: @azaleadancecrew), because I really wanted to make cover dances. We went from dancing in the city park to dancing in an actual studio! And after a year of struggling, we posted our first covers. We’re making covers of K-pop choreographies and post them on YouTube. We are planning to compete in competitions soon. My group is very dear to me and we’ve become very good friends. I hope we can keep making covers for a long time.

My 5 ultimate groups are ONEWE, MY.st, ATEEZ, ONEUS and BTS.

My number 1 would be MY.st. They’re an amazing and talented idol group who deserved more recognition. They debuted this year with their amazing song “Don’t Know” and I recommend listening to it!

This is such a cruel question, because I love them all equally. But if I really had to pick.. it would be Cya. Apart from being a basist and rapper in ONEWE, he releases his own tracks on SoundCloud. And I can vibe really well on all his songs. His voice is very soothing and sweet.

A wish to be granted.. I could make a very selfish wish but I’d wish for concert tickets for all K-pop fans, who are too poor to be able to afford a concert ticket and to go see their ult group in concert. I believe everyone should have an once in a lifetime experience of meeting their favorite artist, but K-pop concerts are SO expensive.

I want to give a shoutout to @monbaksu on twt and to my dancecrew for being such amazing people and being a huge part of my life. <3

Spread love. Not hate. The world would be better that way.