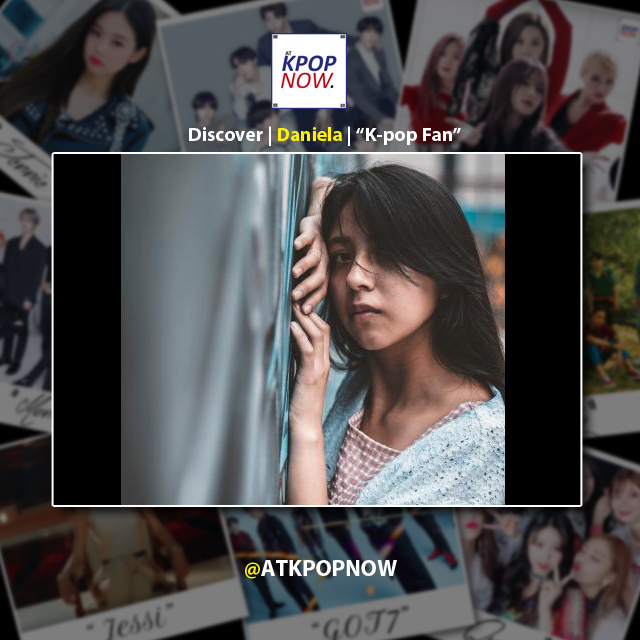 Hello, I’m Daniela. People mostly call me Nini and I am from Quito, Ecuador. I’m 19 years old. I do K-pop dance covers. I’m a shy girl, but with a lot of passion who wants to improve and always show the best version of herself. I’m a dreamer who wants to inspire and help others meet their goals while learning from each other. I really like dancing and it’s my favorite hobby. I also like to do editing.

I’ve been a fan for almost 7 years. My interest in K-pop started in 2013, before that, my cousin was the one who liked to listen to different K-pop groups like T-ara, Nu’est and SuJu. So it was because of her that I knew what it was, but it wasn’t until I saw the K-drama BOF, early 2013, that my interest began to grow in me. At the time I wanted to know more about the actors and at some point I was there watching SS501 music videos and performances. So that’s how they became the first kpop group that I liked and the beginning of this whole experience.

I think K-pop is like a whole new world with a lot of variety and some magical things happening there. You have incredible performances with wonderful scenarios. Amazing voices. Different vibes in each song that can describe each group very well. It all combines to create a roller coaster of emotions, because you can be there jumping, screaming and at the same time you can be there feeling those ballads, singing with your heart and crying at some point. That is the reason why I like K-pop, because it can connect with you in different ways. The differential point, I could say, is that they can be like chameleons: making each person very versatile in many areas, producing more interest in different audiences.

I do kpop dance covers. I started dancing at the same time that I discovered the genre. I started at home, dancing alone, learning without knowing anything about dance and doing it just for fun. I used to dance casually at my school for gymnastic class. In 2015 it was the first KWF in Ecuador and it was on that event I learned what dance cover groups were. I joined my first group in 2018, but I was only there for 4 months. Then I started an Instagram account in 2019, but I deleted it and it wasn’t until the beginning of this year that I started a new one. At the same time I entered my current group NOI-Z. I do dance covers, because it fills a part of my soul. I feel good eventhough it can be stressful at times, but I enjoy the journey and how I can learn from myself. Learning each song is also like looking for new challenges that help me improve.

I’m going to say Girls Generation, Super junior, EXO, Red Velvet and NCT. I don’t know why, but it turns out that my favorite groups are from SM entertainment lol.

Difficult question.. I would say EXO, because when I started liking kpop.. How can I describe it: They were there without knowing it. I knew about them, but had no interest. It wasn’t until 2015 that I started to like them and that I thought; this is the place where I belong to. They became artists who inspire me to continue, who opened doors for me to meet more people and learn so much more about K-pop, because back then I still didn’t know much even though I started in 2013. They were that boost to continue in difficult moments and I even learned a lot and matured thanks to them. The main reason I would say is, because they are one of the groups that I have followed most closely and they have been a pillar of my life not only in relation to K-pop but also in my daily life. Many of their words helped me to reflect and become aware of certain circumstances or even when I needed advice. A lot of things they said helped me a lot.

I think LAY and HAECHAN are on the same spot lol. I like both the same way. LAY is a hard worker who really likes what he does, he is super nice to his fans and very kind with people in general. He always tries to put all his effort into everything and his personality is really funny once you get to know him. Haechan on the other hand is a boy with many dreams, who despite going through many difficult times continues to smile and create a good mood. He gives his 1000% in each scenario and is someone who really has a bright future.

Waa, I think being in an music video for an SM artist will be good. As a cameo or dancing there. Or maybe be a dancer in a concert of any of them, because that could mean I did something right to be there 😉 😉 haha. And that could open many doors for me.

I’m very grateful to my girls from my dance cover group NOI-Z. Each one of them continues to be a great inspiration and I really want to thank them for having me. I want us to continue together and be who we are.

It does not matter what others say, just do it and you will see that you will not regret it. Even the best have been there. You can do it. Everything is possible.